A Little About Our History 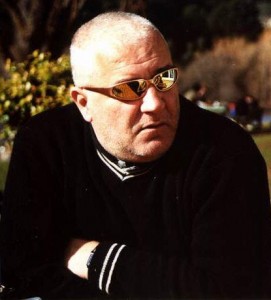 My name is Volvi and I founded the Australian Hayabusa Club back in November 1999 with two others namely Peter Lee and Les Kohn.

I have been asked to write a history of the club and how it came into being. In order to make it an interesting read I may include some of the surrounding events that brought it into being. So here goes:

Back in early 1999 I was riding a Honda ST1100. I have had three of them and whilst finding them to be a great all round bike, I frankly got bored with bikes in general. By that time I had been riding over 30 years on and off. I needed to be invigorated. Then learning of the impending release of the Hayabusa I read all that there was to be had which wasn’t that much at the time. But the excitement of riders worldwide was beginning to stir.

The first time I saw the Hayabusa in the flesh was around March/April 1999 at the Adelaide bike show. I was in Adelaide on a conference and heard of the bike show and seeing I was interested in the Honda Blackbird at the time I went for a visit, not really expecting to see the Hayabusa there.

Walking around at the show – there it was, not just reviews and guess work on the net but there in the flesh. It was mounted on a stand that stood higher then all the other bikes and as the expression goes “it stood out like dogs balls”. The closer I got to it my first impressions were “My how frakkin ugly”. It was a Copper/Silver. Who ever heard of a bike made in that colour combination? The Jap’s must have been colour blind. However, undeterred I made closer inspection. Frakk, look at that speedo, 340 klm/h indicated with another mark for 350. You have to be kidding right; this is just for show I thought to myself. However recalling all the write ups and expectations I knew this wasn’t an all show bike. This was serious; this was the most serious bike I have ever seen in all my years with bikes. Perhaps even far too serious a bike for a slow poke rider like myself. I mean I had taken the ST1100 up to about 220 klm/h and shitting myself in the process, but this was another league altogether. This was a 300 klm/h + My God!

Calming myself down from all the excitement and fighting to get myself away from the ring of people surrounding the bike, I headed over to the Honda stand to check out the Blackbird. A nice shiny blue was the colour chosen for the year and “pretty” she was too. There she sat in all her glory so shiny one could almost become dazzled by the paintwork. Now this is a bike, Honda knows how to make bikes unlike that fugly Suzuki over there and just look at the Honda’s finish, man this is the bike, this is the bike for me. However no matter how the Blackbird may have dazzled me in all its “prettiness” I couldn’t help myself looking over there in the short distance to the Hayabusa standing higher above all other bikes.

That’s not a bike I said to myself “It’s a frakkin Beast”. And there lay its magnet. It wasn’t a bike like most others, it was unique. Even that awful colour scheme, everything about it was unique, unheard of and unseen before. A true beast of the wild.

So leaving behind that shiny ever so “pretty” Blackbird I was drawn back to the king of the jungle, hey! maybe that’s why they made it in a copper/brownish colour, like an untamed lion she posed herself to all, almost beckoning on to her onlookers “Have you got the balls to take me on?”

So that was it, I was well and truly hooked. That bird of prey caught me heart and soul by her claws. There was nothing to be done except to own one. 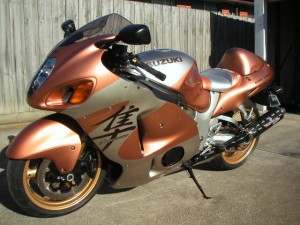 It wasn’t till early November 1999 that my hunger was satisfied. Finally having sold my ST1100 for a reasonable price now with cash in hand I went to hunt for the “hunter”. I found a Copper/Silver for sale in Melbourne. He had it on the market a few months but wasn’t too successful in selling it. This 34 year old married and a father had the bike since end of May ’99.

He clocked up 262 klms in all that time. How come I asked him? He frankly admitted to me that when he first saw it, he had to have one, he was smitten by it. Only one slight problem, he didn’t have a license to ride it but that didn’t stop him spending over $21,000 including an Akropovic 4 into 1 for the bike. During the 6 months he had it he would get his friend to ride it around the block whilst he watched his glory roar past. He may have ridden it a bit to in the dark fearing the cops. But finally his romance gave way to common sense and he put it up for sale. I bought it for $15,750 cash from a very very reluctant seller, but he had a customer in hand and felt it must be sold. So sold it was and happy was I.

After now owning the bike I researched and read all there was to read on the net. My first port of call was the Hayabusa Registry where you will find my entry with last VIN digits of 00033. Yes my bike is one of the very first bunch with a manufacture date of Feb ’99 and first registered on May ’99.

A club on the net was being formed in USA known as the Hayabusa ORG. But there was nothing as yet in Australia. The only site in Australia I found that was dedicated to the Hayabusa was Peter Lee’s site in Darwin titled Suzuki Hayabusa Resource. So wanting to form a club I approached Peter with the view of hosting a page that potential members can register and thereby form a club as the Australian Hayabusa Club. Peter gladly and enthusiastically agreed to create such a page which he did known as the club’s Homepage where we registered ourselves and formed the very first chat site by members on that page.

Assisting me in all things was Les Kohn (busababy) who also had a Copper/Silver. Les eventually went through 5 Hayabusa’s before he relinquished to the ’05 Yellow/Black Gixxer. He hopes to be back on the Hayabusa when Suzuki will make a new version of the bike.

And so our club started initially with barely a handful of members but to our surprise it grew rapidly once word got out that we existed. We promoted ourselves on other sites. I printed up fliers of this newly formed club and handed them out to all Suzuki dealers asking them to hand them out to any Hayabusa riders new and old that they may come across. Whenever I came across a Hayabusa on the road I approached its rider and told him of us. If there was no rider to be seen I left a note on the bike. 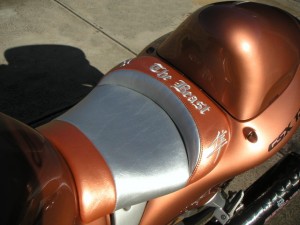 So slowly we got more people involved. Interstaters were also getting involved at their end and so it wasn’t long before we outgrew the chat board we were using on the homepage.

Peter Lee initiated our new chat board on Ezboard which we used for just over 6 years. Richard (demeester) joined us around mid 2000 after I left him one of those little notes that I would do to every Hayabusa I saw in those days. It wasn’t long before he was made board administrator along with Les and myself.

Unfortunately there was some discord amongst the members and without going into detail or the politics of it all a small group broke off and formed their own club with their own chat board on they’re new site. There’s no point in rehashing the past or to apportion any blame but suffice it to say it was a difficult period which lasted well into the year of 2000 and early part of the following year.

We continued as we were on Ezboard and eventually the other group faded or disbanded and some rejoined our group whilst others weren’t heard of again. This was a difficult period however it is in the past and we all moved on, shook hands and continued with what we all loved best and that was with the Hayabusa.

We now finally have our own website with Australian Hayabusa Club and our new Forum. Many thanks have to go to our other administrator Peter (DjPete) for his pushing us to form our own website and not be at the mercy of Ezboard and we thank him for all his work that he put in on both sites. Many Thanks DJ. Also we welcome our new Administrator Rod Norris (Busa-Rod) who is firmly dedicated to the Hayabusa saying they will have to bury me with it as I will never give her up.

Many thanks also have to go to Richard (The Wild Wind) for all his years of service to the club including arranging all our Annual Conventions. And of course without Peter Lee’s assistance with his website we may never have got the club off the drawing board, so many thanks due to Peter too. Also a special mention goes to Heidi from the ACT who has been and is still with us since the very first few months of the club.

We are now approaching 8 years of the existence of the club and I know this because my Hayabusa is now over 8 years old and have ownership of it almost the same amount of time.

I started my venture by being bored with bikes. But that was only until I discovered the Hayabusa. In all my years of bikes, now close to 40 years, (I am now 52) I have never owned a bike that I wanted to keep for longer then eighteen months. Not so with the Hayabusa, every time I get on it it’s like the first time. I have never experienced that with any other bike. The Hayabusa of 1999 will go down in the history of bikes as one of the most remarkable bikes ever produced and yes especially that once ugly but now beautiful Copper/Silver, the colour that I grew to love.

Finally I wish to say that I am truly pleased and proud to have been associated with this now iconic bike.

Welcome to the Australian Hayabusa Club.